Bringing back a Swiss Vetterli?

Bringing back a Swiss Vetterli?

Good evening all! Newcomer to this forum, so allow me to introduce myself. My name is Justin, and I have been a die-hard firearm's enthusiast/tinkerer for the majority of my life. I've got many, many repairs under my belt, but *most* would likely qualify more so as 'armorer'-level repairs for people whom know next-to-nothing about a firearm. However, there have definitely been a few, more in-depth projects.


So, that brings us to the subject of this thread: 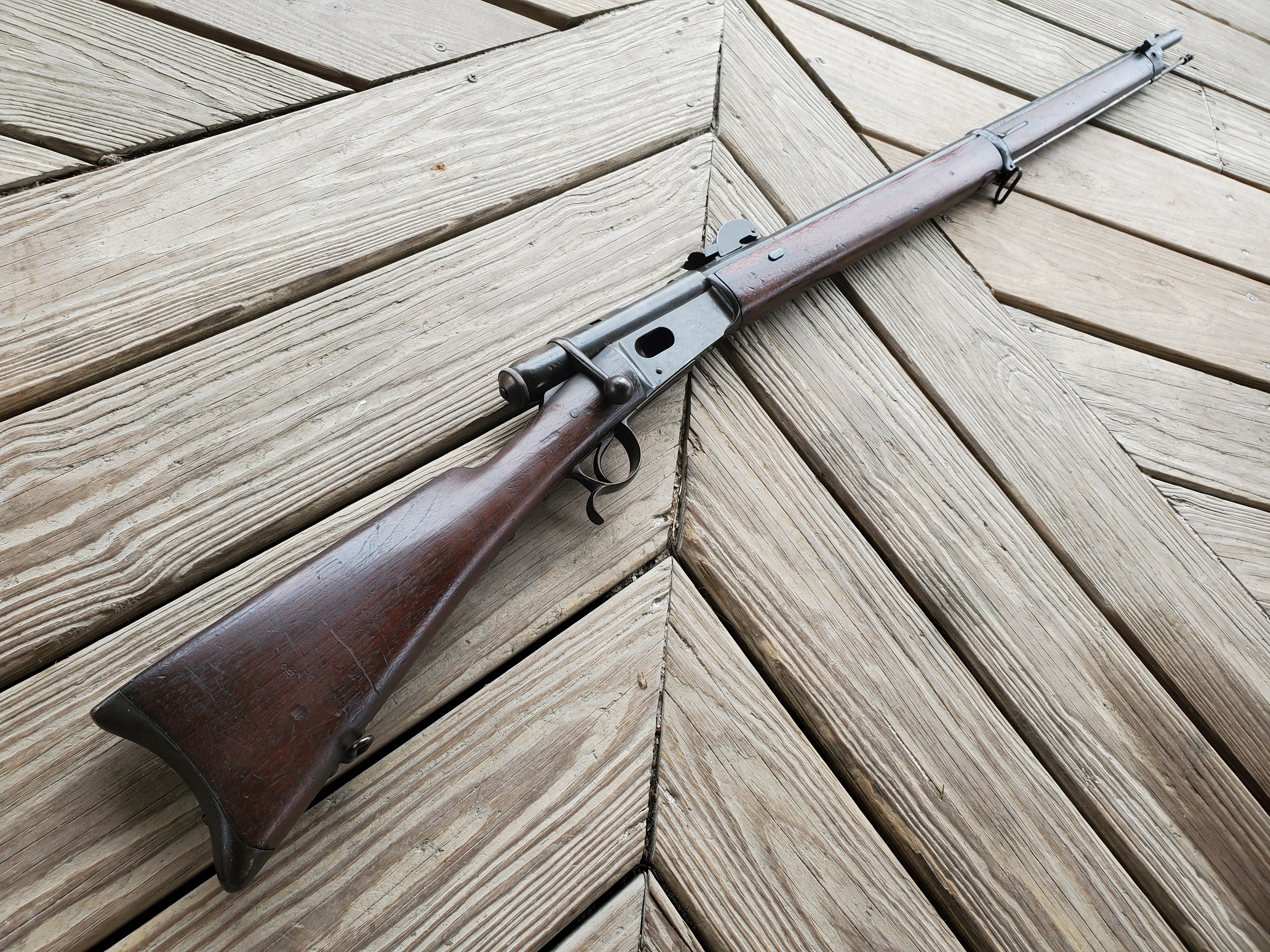 This is my most recent purchase from Gunbroker. A Swiss M1878 Vetterli. I had purchased it from an online gun retailer, whose inventory reached the thousands. Therefore, they clearly have no interest in inspecting each and every rifle coming there direction, and I cannot blame them for that. However, it did end up that, due to the "What is shown is what you get", and pictures being limited, what I initially thought was a somewhat easy cleanup of an old rifle, turned out to be another project.

At first, I saw this and thought, "No big deal. I'll Acraglas it, and it should be fine.": 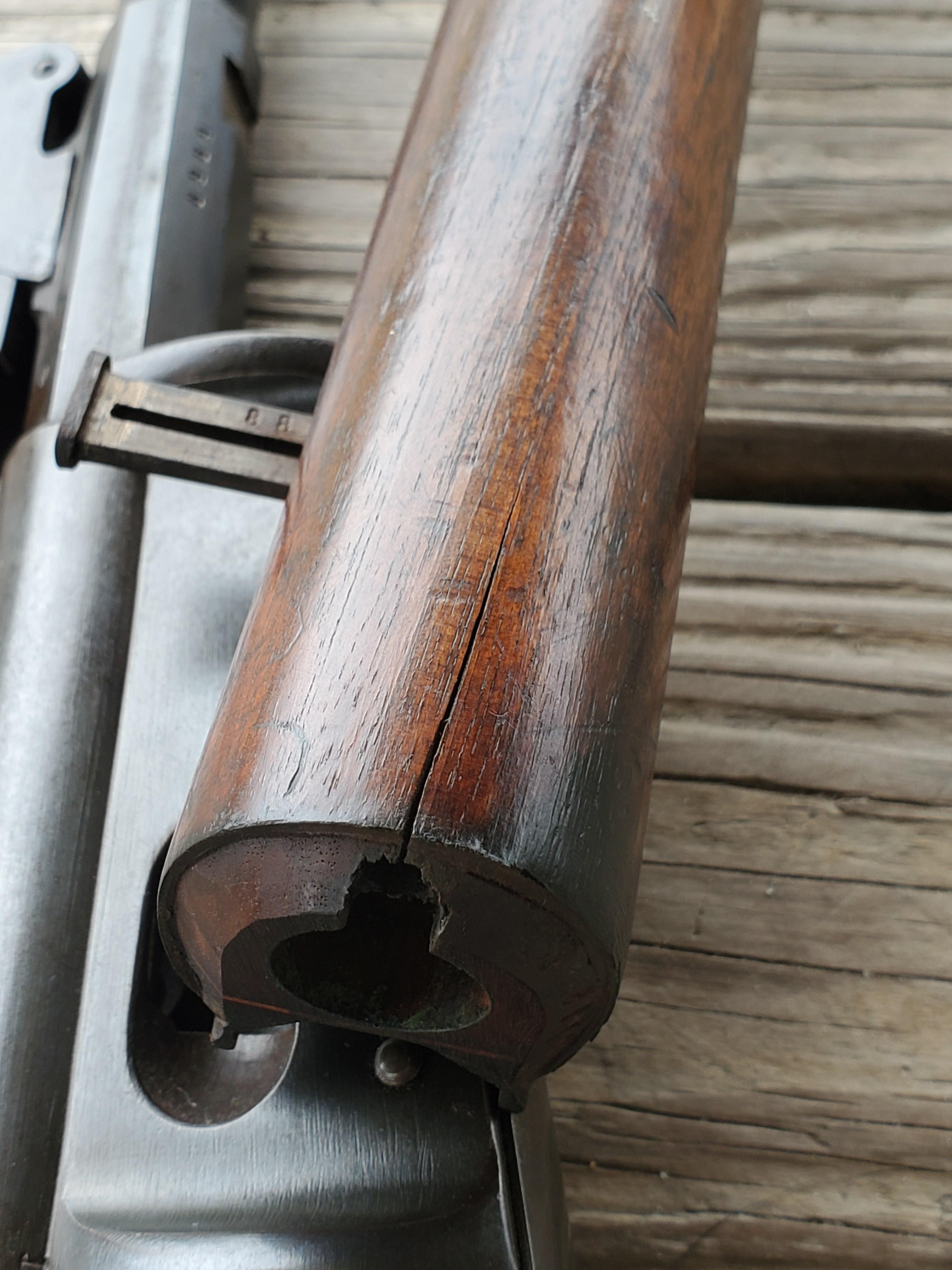 But, what was hiding underneath of the clearing rod is the reason for this visit: 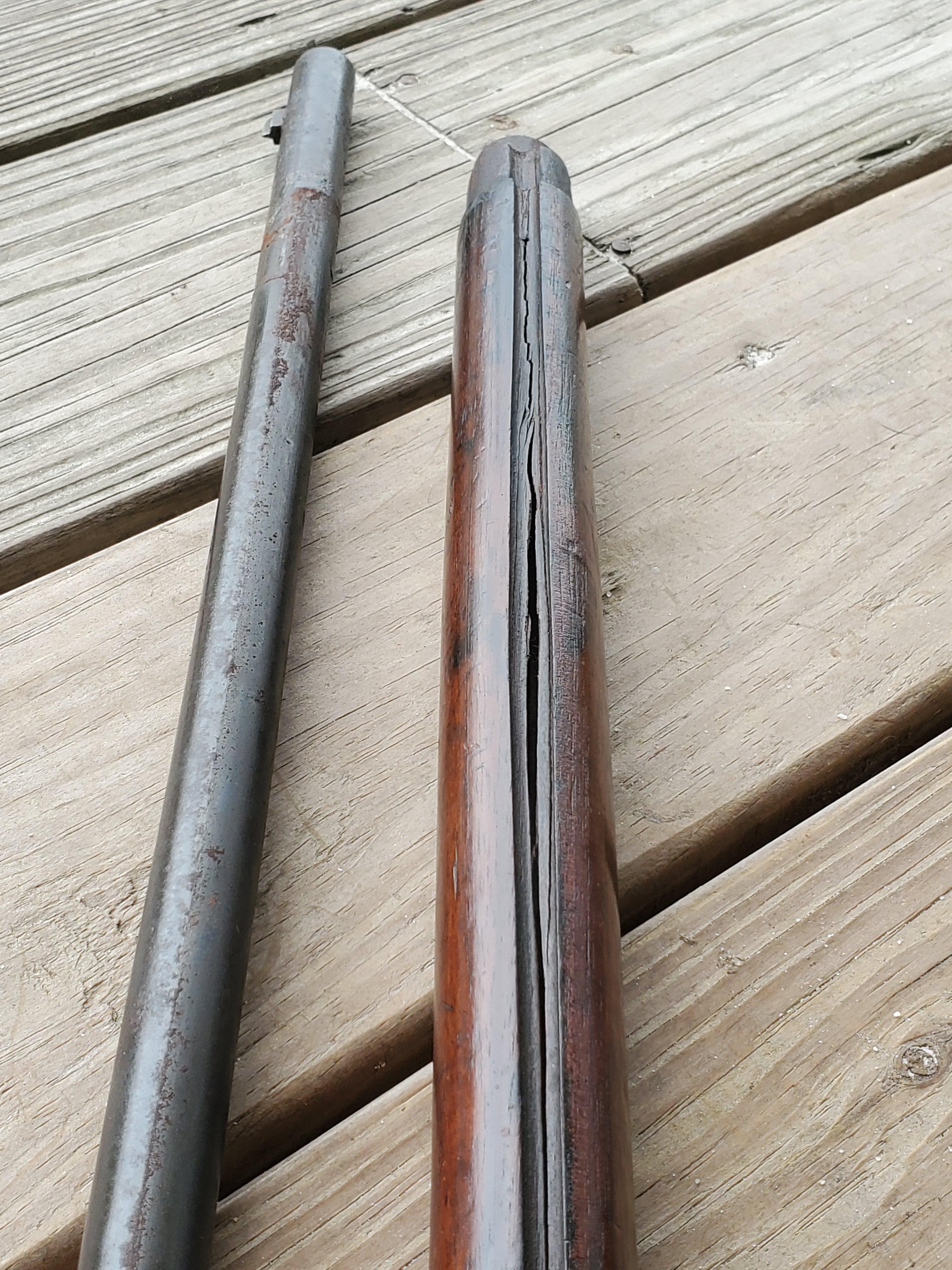 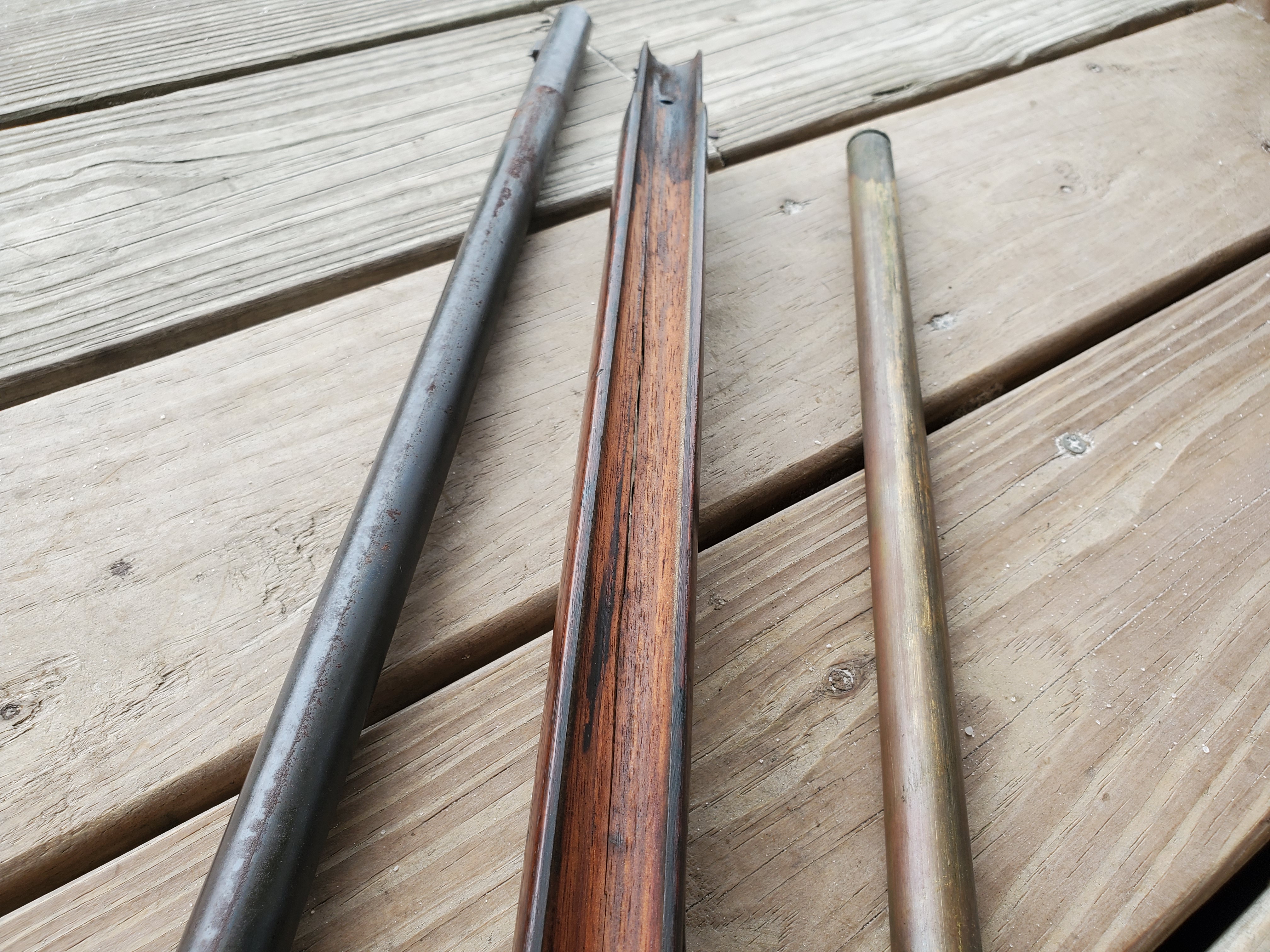 So, I know what you guys might be thinking.. "Hang it up...". Well, let me tell you this. I have fixed a number of, what were thought to be 'un-fixable' pieces of wood. A couple of examples being -- An upper handguard to a Finnish M39, split right down the middle, in which I was able to lay a coat of Acraglas down, followed by crocus cloth, then Acraglasing over the cloth to give it rigidity. No issues whatsoever. Another being a handguard to a 16 gauge which I had to chisel away at the existing wood in order to add new, handmade pieces of walnut in which I would use to drill new holes for the screws which retain the hanguard latch, as well as plugging 2 other holes on the same handguard with wooden dowels, so that I was able to re-drill and install the forend spacer, then more or less 'glass bedding' the entire ensemble...

Anyways... Where am I going with this? Well, I can't use the crocus cloth method to try and keep the wood from splitting more under recoil, because these rifles are fed via a tube magazine. 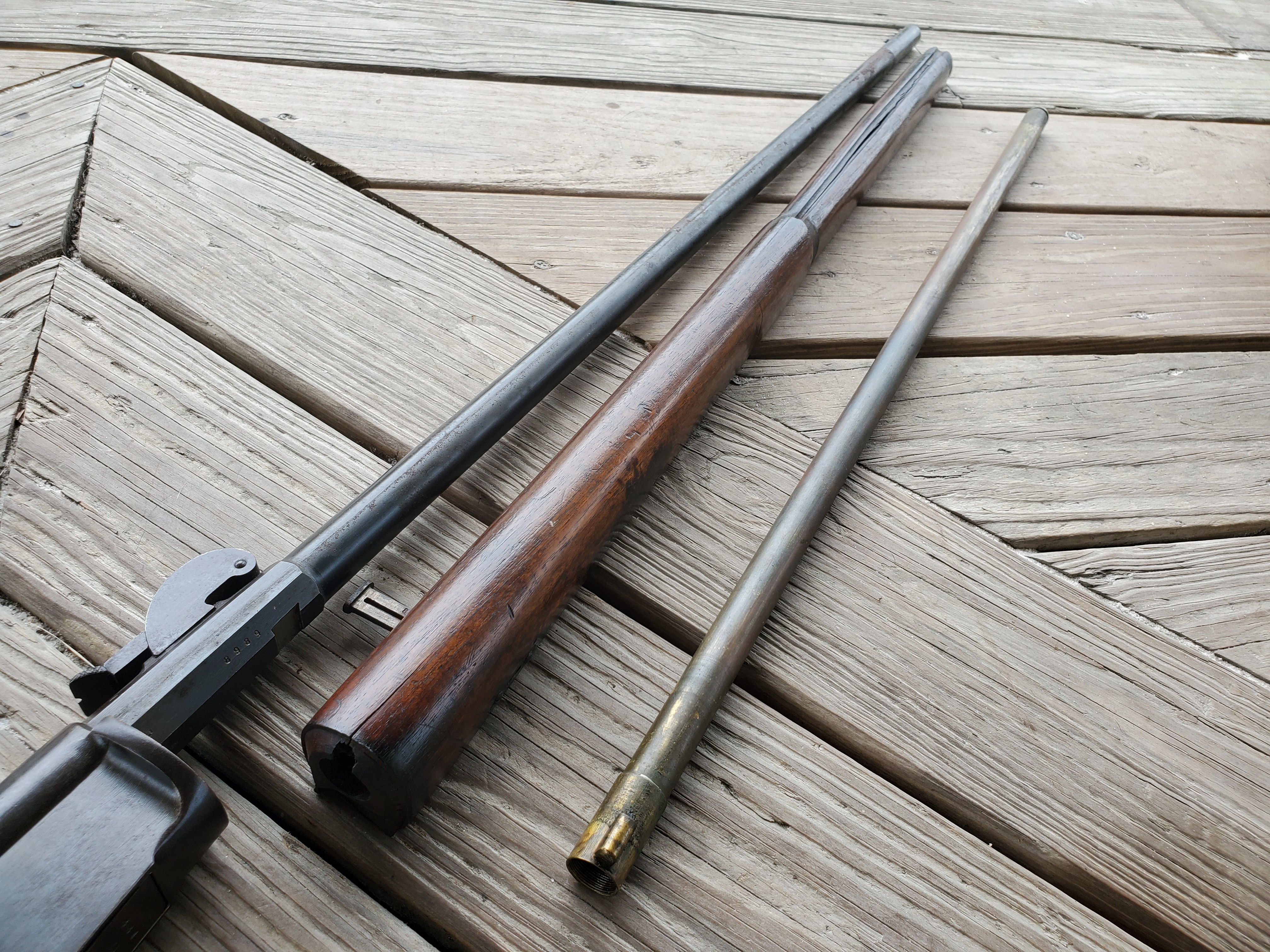 This is the same battle I've been fighting with my Lebel, in fact. The wood is very narrow between the bottom of the handguard and where the tube magazine sits, and unless I were to bore the hole out where the tube magazine sits, and 'somehow' magically align everything perfectly for a perfect feed, so that I could lay down strips of the crocus cloth *around* the magazine tube? It just isn't going to happen that way.


So, I think I *might* have devised a plan which could potentially bring this girl back. But, it wouldn't be without sacrifice. Firstly, I'm thinking I will try and wrap the handguard in a damp rag, then wrap surgical tubing around it, and place it outside under the sun to try and get the wood to come back together some. Right now, it only wants to spread apart between the areas of the barrel band and the forend cap. Then, for the repair itself, what I am *considering*, is using the magazine tube as the structural support for the wood, by Acraglasing the magazine tube into its hole, wrapping surgical tubing around the wood to keep it together around the magazine tube, filling in all of the cracks with more Acraglas, spray release agent on the barrel and the clearing/cleaning rod, and installing all of the metal parts back to the forend until the Acraglas cures.

In essence, I would be making the magazine tube (something that isn't really *meant* to be taken out anyways) permanently attached to the forend, so that it can (hopefully) act as the support the wood needs to keep from splitting any further/ever again.

Thank you for your time!
Top

I am not sure if that forearm front piece is easily obtainable or not. I have seen those odd Vetterli rifles at shows that do not fire for $100 to $150 as wall hangers. I would get a replacement wood stock piece if possible. I do not own or know the different models and what stock fits what model.

For a repair
But I might suggest you use fiberglass cloth on the inside with the Brownell Acraglass. As for fit you might have to remove some wood (the thickness of the fiberglass and epoxy) as to not build up the channel. I am not sure the wood will pull together if tied with waxed dental tape. At least the top wood looks great. Remember you will also have to color the Acraglas. You can also mix in some wood dust so the stain takes a little better in the cleaning rod channel. Also be sure you have a dowel covered with glued-on sand paper in order to sand out the channel for the rod to fit again. Make the tool first. You may also want to get a wood carving u shaped gouge to help remove excess epoxy. This can be made from a round screwdriver or pipe fragment. Just get the proper fit prior to actual gluing of wood replacement. It will take some carving & sanding to get it back to a normal look.

The upper barrel channel is split
Also depending on the thickness of the wood, some cross supports like brass wire or wood may be needed to keep the split together under load. This would be done on the barrel channel if the wood is thick in this section. Again you will have to dig out a thin groove to lay in the cross supports. This may take two or three steps of acraglass applications. The cleaning rod groove can be just epoxy that is smoothed out. Most likely you can attempt its application in two stages to fit in a wood splice so it is not all acragalss epoxy. Since you cannot get glue inside the loading tube hole, using the magazine tube as the structural support for the wood is a great idea, you will have to use a well waxed mag tube. Or use a pipe of similar size. I would coat it with hot wax. This is if you want to take time to fit it for layer removal. Or like you say just glue it in with the epoxy for a support to hold the wood together. I am not sure of how the assembly is done and if the tube and wood come off as one section??

I HIGHLY recommend, fiber glass tape or fabric to the inside surface of the barrel channel. This will help greatly in preventing future cracks. Degrease all wood with denatured alcohol. Before you glue in the cloth, you will need to check the fit of the forearm to the barrel. If too tight, remove more wood where the cloth makes contact. So, you may need to sand down or remove some wood to the inside channel surface, before installing the glass fibre tape. Also check the fit of the of the Magazine tube if you actually coat it with wax. You want to be able to remove after the glue sets. I would suggest you make a sand paper covered wood dowel that fits the mag tube hole so if the epoxy glue dries and does not allow the tube to go back into the hole you have a pre fitted sanding rod tool to sand out the mag tube hole in order to refit the tube. The acraglass has a tendency to flow.

Like you say, if you want to glue in the loading tube into the stock. That is surely OK. But sand it coursely and have a clean spotless metal surface and clean wood so the epoxy sticks. That would solve some structural problems to that wood piece, but I would still support the barrel channel with fiberglass.
Last edited by 72 usmc on Thu Oct 22, 2020 10:35 am, edited 1 time in total.
To old to fight and to old to run, a Jar head will just shoot and be done with you.
Top

Also note tagmil on flee bay has a stock for $159, but it looks different from yours. There must be different models. But a stock set for $159 is fair, K98 stocks go $300-400. With time you might find a dog rifle at a gun show or just a stock on eBay.
To old to fight and to old to run, a Jar head will just shoot and be done with you.
Top


Yes, sir, there are a number of different Swiss Vetterli rifles. I'm not entirely certain I properly conveyed exactly what my plan was. I was referring to using the magazine tube as a *permanent* support by Acraglasing it into the the magazine tube hole, and it would thus (hopefully) cause the wood to remain affixed, and supported by the brass tube.

The reason for not wanting to swap out the forend for another is two-fold. One, despite it being a relatively inexpensive rifle, I have a soft spot for old military surplus rifles and believe that they should all be saved from neglect, if possible. And secondly, the numbers match.


I was just curious as to what the consensus amongst everybody would be if I were to use the magazine tube as a sort of "sacrificial piece", by making it permanently adhered to the forend in an effort to keep it from splitting any further. Whether it would be viewed as an unforgivable sin & grounds for being forever considered "bubba'ed", or if it would be viewed as a necessary evil to revive an old rifle?

As mentioned, I now have two rifles that are in the exact same boat, all due to the fact that they are fed via tube magazines. The other is a St. Etienne M1886 M93 Lebel: 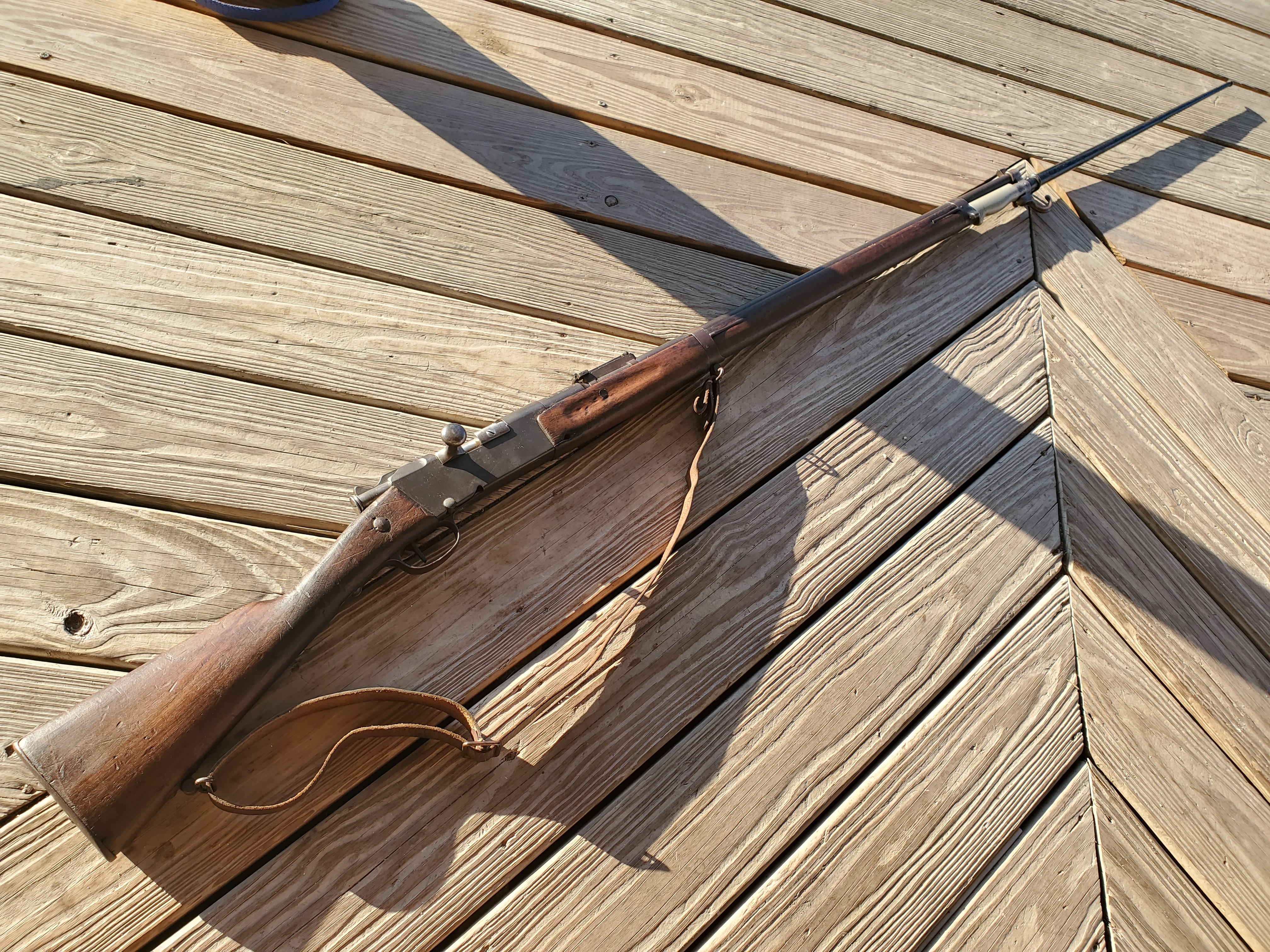 So, I'm just trying to determine the best method of being able to repair some old military tech in order to put them back into [limited] use.