Libertytreecollectors just got 2 Trophy rifles and they have some excellent detailed photos worth printing out for reference (the total is 16 per rifle, lots of ink, but really nice views) but they do not have any close up views of the steel rods, cut firing pins or other modifications. Sorry as of 18 January 2018 these specimens have been sold and they did not post these excellent close up views of these rifles in there reference library so only the first photo overview remains in this post. I should have reposted all there photos

This has a steel rod hammered into the barrel and the firing pin tip is cut off. No import mark.

and a second rifles seen here:

his has a steel rod hammered into the barrel,e firing pin tip is cut off and missing the extractor an collar.

Man I would love to find one of these at a gun show for $200. Interesting no slings, but they have the cleaning rods. Posted for general reference. Copy the photos while you can.
Back in 2009 GUN COLLECTOR magazine had an excellent article entitled "Collecting First World War Trophy Rifles" by John Wall see pages 27-29 and then 35-36. Unfortunately this issue is out of print and no back issues are available. I am not sure I can post all 6 jpegs of the issue, but here is the first page and second page.

This is what John Wall has to say in the end.This is the little box at the bottom of p. 36. His info & a quote

Was so lucky last year to buy one (no trophy rifle) for 50 bucks. Shoots terrible with the rolercoastersights but i just love to look at it. Had to buy a cleaning rod for almost the same money as the rifle 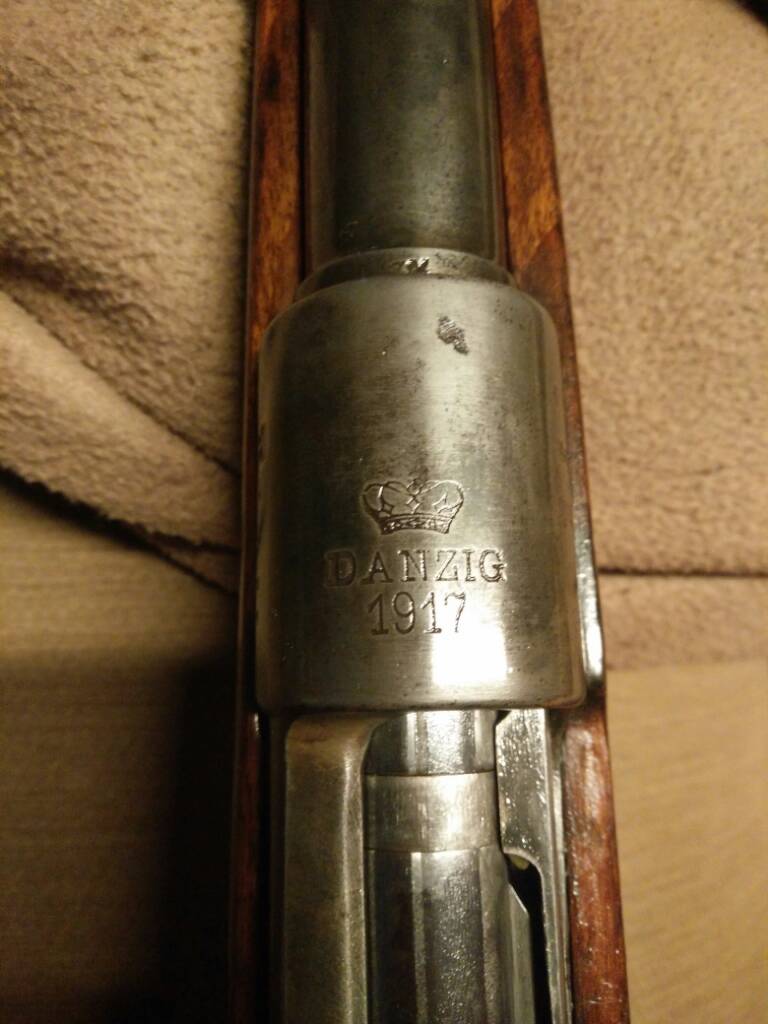 Sent from my ONE E1003 using Tapatalk

Anyone actually have one of these so they can show some photos of how the rods look in the barrel from a muzzle view and chamber view? Are they the full length of the barrel? Is the bolt face welded or is the firing pin hole intact, just that the pin is cut short? Could you please post some photos of these?Our VFW does not have any to display. Does anyones VFW still have some of these WW I Grew 98 on display?
To old to fight and to old to run, a Jar head will just shoot and be done with you.
Top


Was the barrel plugged by welding or soldering? Is it possibly reversible?
Hardened steel plugs about 1.75" inches long that were hydraulically rammed into the chamber and muzzle. These deactivation's were supposedly done in France before the rifles were shipped over to the US for bond sales. I know some other members on the forum have successfully removed the plugs but I tried drilling through the front one just to see if it was possible and none of my drill bits will even touch it. I'm most likely going to leave this rifle plugged since I have two other Gew98's I can shoot.

The plugs are part of its history, if you remove them, it is just a nice Gew98, but no longer a War Bond Rifle.


Photos are from above source, just that the photo bucket marks are removed and the photos are reposted fixed into forum as documentation of a great example.

Bones 92 specimen
Like most WW I GEW 98 Trophy rifles there are steel rods pressed into the muzzle and throat of the chamber area, The firing pin is cut in front of the bolt spring.
source https://forums.gunboards.com/showthread ... bond-Gew98

This is members Martin 08, GEW 98 bring back, not a War Bond plugged specimen. Martin 08 always has great photos and documentation. So for anyone that wants a close up view of a unmodified, WW I bring back Gew 98 check out this link. It is worth a print out or to save as a PDF.
Its that nice.

I had read many times about clipped firing pins on GEW98s, so that is how I knew to check.
But for those of us who aren't familiar with "War Bond" rifles, could you expand please? Thanks.

Hi Matt,
When the U.S. finally declared war on Germany on April 2nd, 1917, the U.S. military was woefully unprepared for war, let alone for a World War. To fund the war effort, the U.S. Govt. began to sell war bonds referred to as "Victory Bonds" at the time. Bonds are a form of debt securities that guarantee the payment of the principle and interest when the bonds matured. Over $30 billion dollars were raised for the war effort.

How this applies to the rifle in question is as follows.

First of all, lets take shooterike's statement completely out of the discussion.

"The "clipped" firing pin was done by order of some US officer to "demilitarize" it before the GI was allowed to take it home."

I can promise you that NO officer ever told a "Doughboy" (GI's fought in WWII) to clip the firing pin on a trophy rifle before shipping back to the States. Documented soldier "bring-backs" are never encountered with clipped firing pins.

As a reward to people and organizations that purchased large amounts of Victory Bonds, a large number of captured weapons were shipped to the U.S. by the government. The military picked over everything with a fine toothed comb for reference collections, for military branch museums and for state and national museums. Machine-guns, rifles and helmets were also doled out to VFW Posts, while rifles were distributed to individuals who had purchased a large amount of Victory Bonds.

The rifles in question were considered war trophy's that were expected to be placed on display rather than fired. The decision was made to clip the firing pins on these rifles in order to render them "safe" in the hands of members of the public who had no experience handling firearms. Can we say "city folks?"

This process was done on an organized basis. The MOST LIKELY scenario in regards to the clipped pins would have resulted from the organized assembly-line style approach where rifle bolts were removed by one person, disassembled by another and the pin clipped prior to the re-assembly of the bolt by another person. The mixture of serial numbered parts would hardly have been of concern at the time.

Per your comment Matt, this was NOT the only means of deactivating weapons. Other more destructive options were used in some instances. As collectors, we are very lucky that the majority of these rifles weren't ruined in the process!
Hope this info helps.
Warmest regards,
John

This one is mine, a non War bonds Trophy rifle. It is an actual bring back- no cut firing pin & the pin # matches the rifle, No duffle cut. :
Always check on matching rifles if the firing pin in the bolt actually matches the rifle & bolt serial number. Some can have a matching bolt to itself, but does not match the rifle. Most have a matching bolt, but the firing pin was cut, replaced, and as a result the firing pin's serial # no longer matches. Also many others have a mixture of parts and the bolt does not match- a bolt miss matched Gew 98. Some even have Turk, or unmarked, or remarked bolts.

To old to fight and to old to run, a Jar head will just shoot and be done with you.
Top

Pictures restored 17 June 2020 from the Wayback save.
To old to fight and to old to run, a Jar head will just shoot and be done with you.
Top

I wish I could find a plugged version at a show.
To old to fight and to old to run, a Jar head will just shoot and be done with you.
Top
Post Reply
13 posts • Page 1 of 1